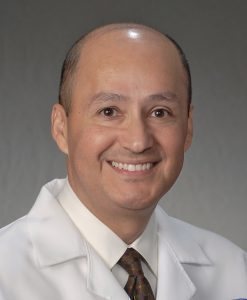 Dr. John Martinez, originally from Los Angeles, is a board certified and fellowship-trained dermatologic surgeon who is competent in all aspects of surgical and cosmetic dermatology. He has been practicing Dermatology and Mohs surgery since 1995.

He received his dermatology training at the University of Buffalo. Following his fellowship training in Philadelphia, he returned to Buffalo New York and was appointed to the rank of Clinical Assistant Professor of Dermatology. He was part of the dermatology residency faculty and was closely involved in the training of dermatology residents. He also served as interim Chief of Dermatology Surgery at Roswell Park Cancer Institute in Buffalo, New York.

Dr. Martinez relocated to Southern California in 2004 and joined the Southern California Permanente Medical Group, where he was appointed to Chief of Dermatology at Kaiser Permanente in Orange County. He was also the co-founder and co-director of the Procedural Dermatology and Mohs Surgery Fellowship, in collaboration with Dr. Christopher Zachary, at the University of California Irvine. He was appointed to Clinical Associate Professor of Dermatology at the university of California, Irvine. He enjoys teaching dermatology residents and also training fellows in Mohs Micrographic surgery.

Dr. Martinez has been a committed teacher throughout his professional career. He was awarded the President’s Award for Volunteerism by President Barack Obama in 2010. In 2009-2011, he was named Physician of Excellence by his peers and published by the Orange Coast magazine. He was also chosen as Orange County Physician of excellence for best Mohs Surgeon in 2011.
His personal hobbies include running, weight training, tennis, hiking and spending as much time as he can with his family.